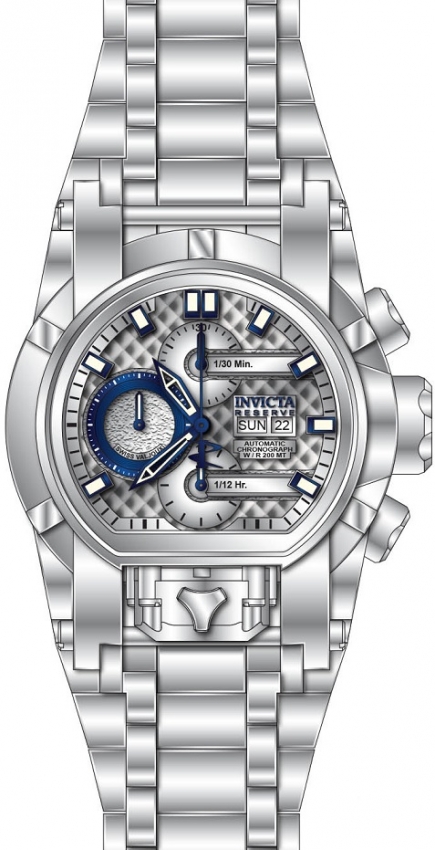 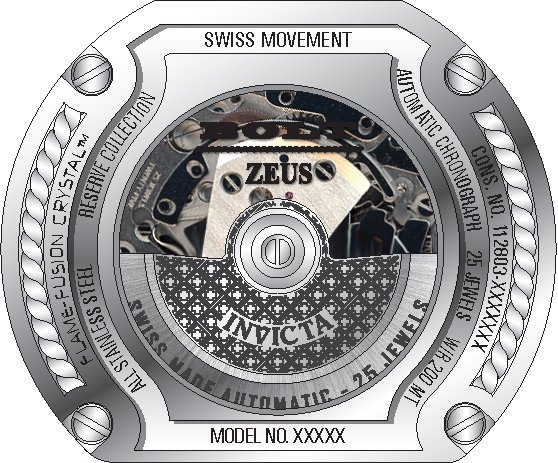 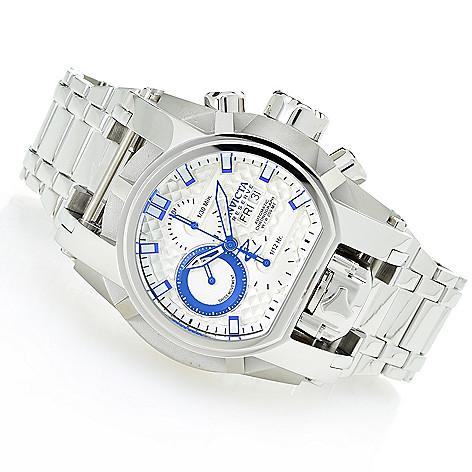 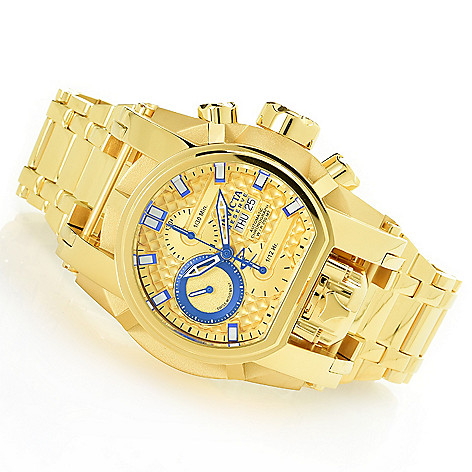 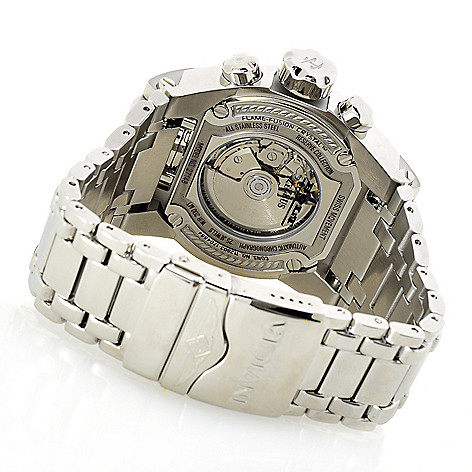 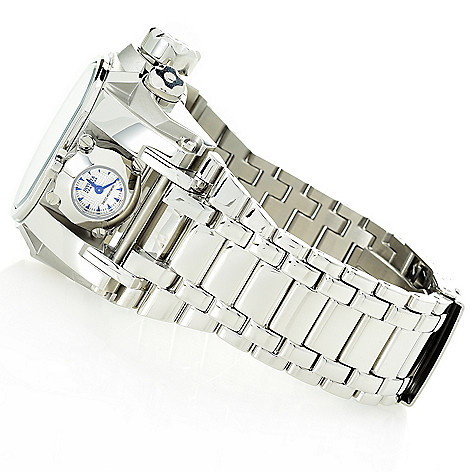 It's OK to demand a little more from your watch. Invicta is happy to oblige with their Reserve Bolt Zeus Magnum. With a staggering 52mm stainless steel case, there's plenty of room on this timepiece to fit a whole host of extras. A reliable Sellita automatic movement powers everything you need from chronograph subdials, to luminous hands, to an elongated day / date window. There's even enough space left over to fit a second Swiss quartz powered dial along the lower lugs to track a second time zone.

Actually... it's an auto chrono/quartz 3hand
If that's the price of the sw500, the tourby price is gonna be hysterical.

I'd rather not buy an automatic and still have to change a battery.

I once was waiting this now I'm not interested.
Thanks Lee.

bigbasshunter said:
I'd rather not buy an automatic and still have to change a battery.
Click to expand...

Regardless, I think the price is still a joke to try and get three times the price of the quartz option which Invicta has flooded the market with. I was thinking what else you could have put in that secondary movement to make it an automatic watch (besides a mini mechanical). Something as simple as a compass would have been kind of cool and different but I'm not sure if the magnetic pull from the compass would be enough to screw up the automatic movement. I spoke to a guy that used to work for Rolex and he told me he had watches sent in that were accidentally magnetized. Apparently a magnet will cause an automatic movement to run backwards. The only way to fix it is to take apart the entire watch, every screw, and demagnetize. He said if he didn't get every single piece of the automatic movement demagnetized and put it back together it would remagnetize and he would have to do it all over again.
They probably just should have pulled the secondary movement all together. But that would have cost Invicta money instead of using the same components they already have readily available in the factory.
I dunno... maybe diamond chips, like how Renato used to do that Circle of diamonds at the six position in many of their watches? Moon rock? Laser beam?, haha.
But yes, if they are wanting to that type of price for this watch that secondary movement should have been a mini mechanical IMO.

Around the 6:28 mark in the first video the guy talks about magnetized movements.

Though Rolex is known for excellent precision in their timepieces, every mechanical watch will, at some point, slow down or even speed up. Mechanical watches, like those made by Rolex, are regulated by a hair spring. Rolex uses a precision engineered Parachrom hairspring. Their watch movements are also COSC certified which means that the timepiece will deviate no more than -4 to +6 seconds a day.

There are several reasons why your watch might be running fast or slow. The variation in speed is greatly influenced by the amount of activity your watch endures. If you wear your watch on an active day, it is likely to vary from a day when your watch saw little movement, such as sitting on your dresser. Temperature, whether it be too hot or too cold, can also influence a watch’s precision.

One of the biggest impacts on your Rolex’s reliability is how often it is serviced. If your watch is running slow, it could be because it needs a good cleaning. When you have your Rolex serviced, the certified technician will take it apart, clean it, regulate it to ensure its precision, and then put it back together. It is suggested that you have your watch regulated every 2 to 7 years, or when it begins running slow. 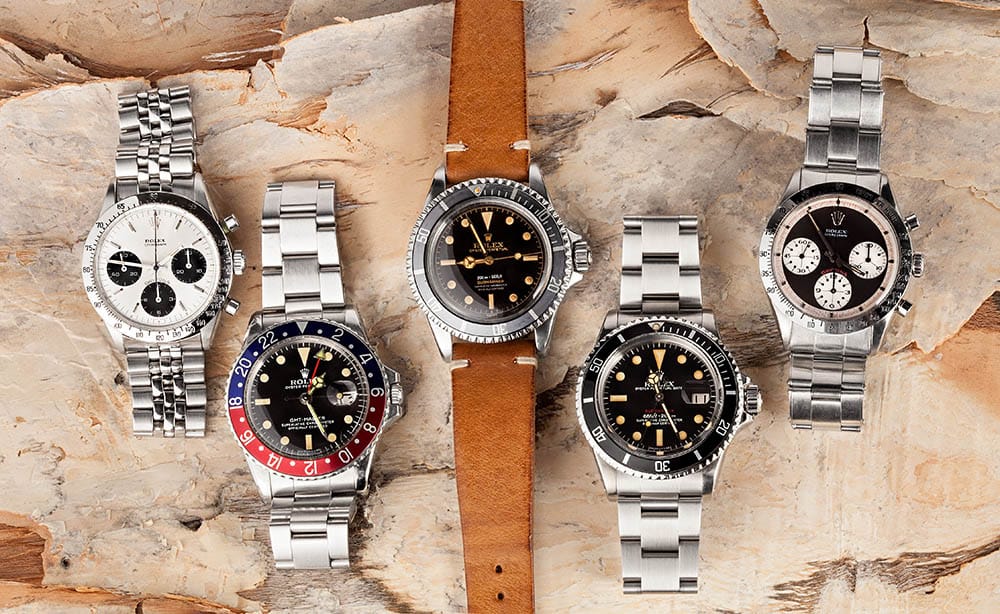 Rolex Watches​
​
If you notice that your watch is running fast, it is likely that the balance spring became magnetized. Powerful magnets can be found in a number of places, such as in some stereos and laptops. When a balance spring becomes magnetized, its coils stick together which shortens the balance spring and speeds up the watch. Though this sounds bad, it is an easy fix for a reputable watch service department. Rolex also attempts to lessen this risk by developing hairsprings that are very difficult to magnetize.

If you do accidently magnetize your watch, it will disturb the timing rate, but it won’t do any permanent damage. What happens most often is that the balance spring becomes magnetized and the coils stick together. As a result, the watch will start to run very fast, sometimes gaining several minutes a day. Luckily, it’s an easy thing to fix. Just take it to an authorized dealer to have the watch de-magnetized.

I’ve been in the watch business for nearly 40 years, and I can tell you that I’m seeing more magnetized watches now than ever before. It’s not a huge number, but it is growing. Mostly, it has to do with the proliferation of electronic devices with strong magnets like the one in your iPad cover.

But even though magnets are everywhere — from the speakers in clock radios to the catches on laptops and eyeglass cases — that doesn’t mean that you will definitely magnetize your watch. Some timepieces are more susceptible to magnets than others because they use components made from ferrous metals instead of non-magnetic alloys.

Well, they've eliminated 50% of the quartz in that watch. That's a good start.

I like it, but price wise, no way!!! I wonder what the tourby is going to cost. Probably

At this price you could get a pure Swiss automatic from Baume Mercier, Oris or other; something comfortable you would enjoy wearing.

It's not the worst watch in the world but if I spend this kind of money I generally buy something that's a bit more understated and classic in appearance. Good news there will be one just like I'm speaking of in the deals of the day soon. LOL

Was wondering when that was going to happen seeing as how they weren't as popular as expected. I think they would have sold better if they did different executions but anyone who already grabbed the all silver or gold versions in quartz s was paying all that extra money for only one movement now being Auto.

bobbyd said:
Was wondering when that was going to happen seeing as how they weren't as popular as expected. I think they would have sold better if they did different executions but anyone who already grabbed the all silver or gold versions in quartz s was paying all that extra money for only one movement now being Auto.
Click to expand...