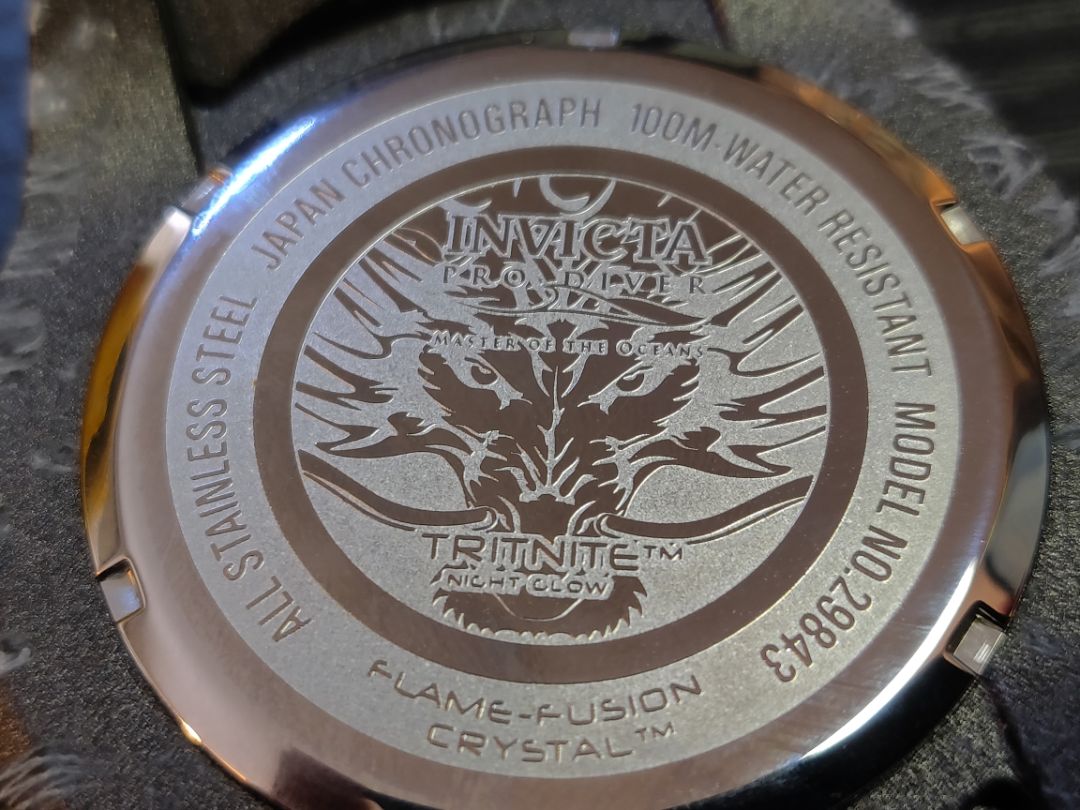 So, I note the caseback here reads “Master of the Oceans,” and, I don’t know, despite the optimistic packaging in a dive box that likely leaks, when I consider that this watch only has 100m WR, and not even a screw down crown, I think oceanic dominance is a bit of a stretch, frankly, haha. 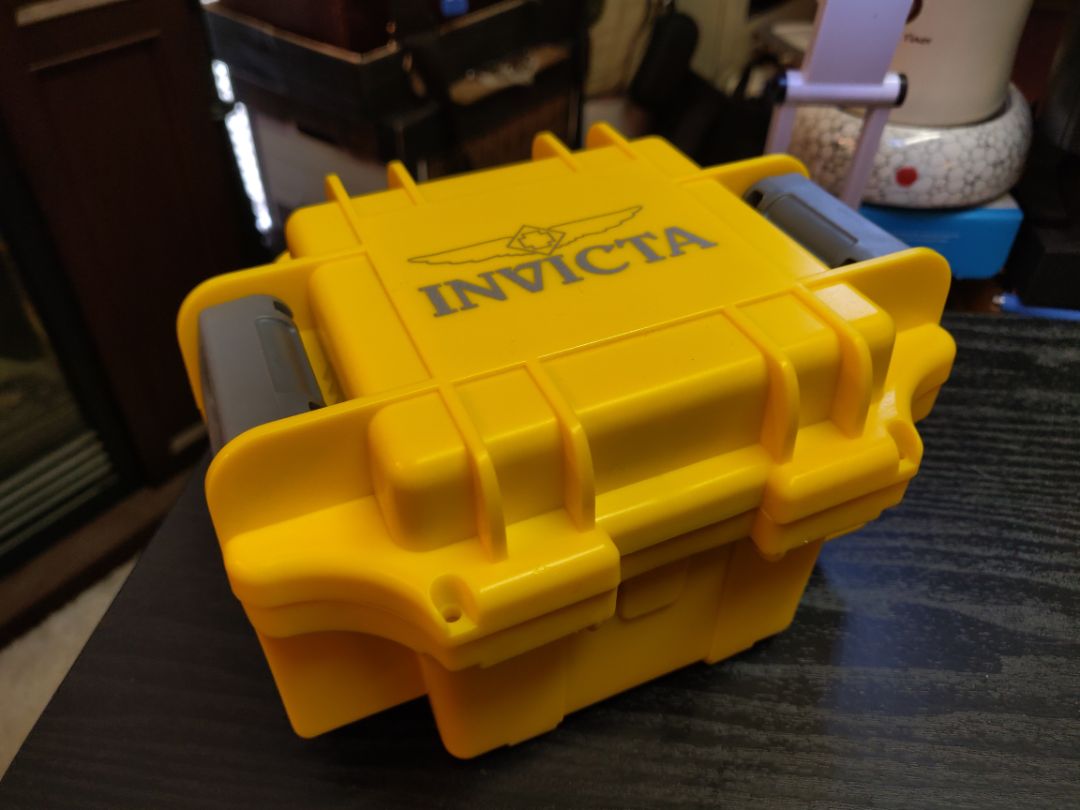 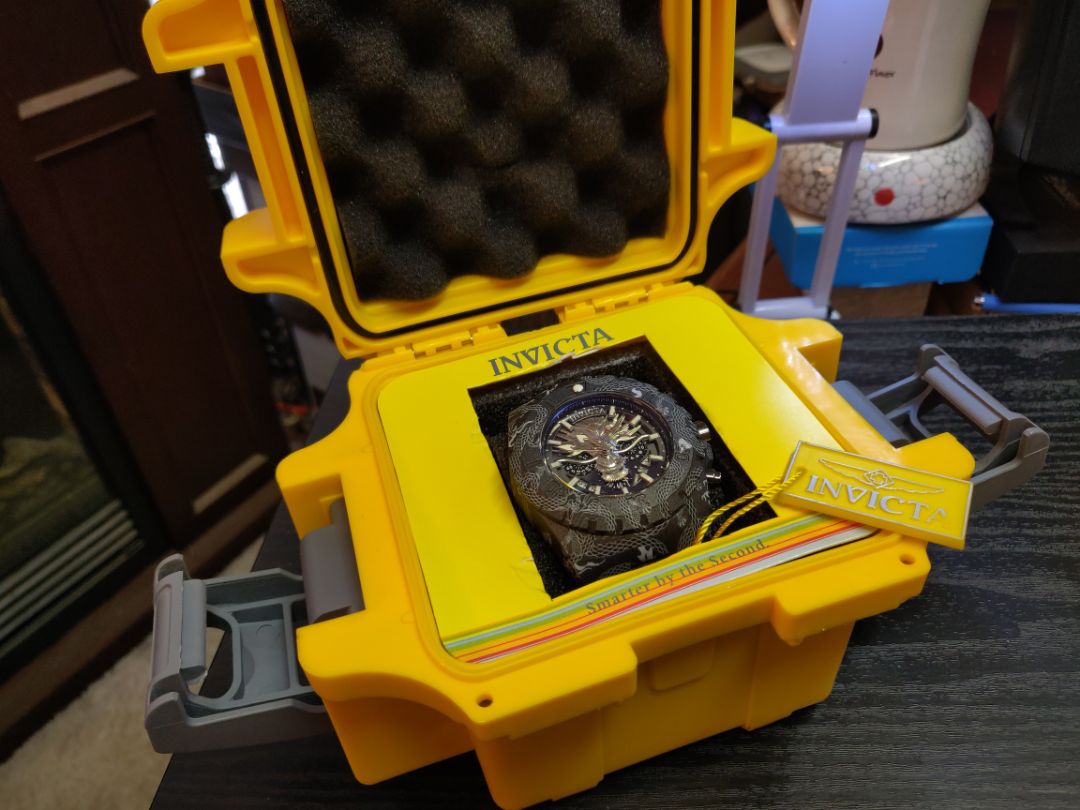 But, I will say that this new hydroplated dragon themed Invicta is pretty enough that it could have possibly saved Season 8 of Game of Thrones single-handedly! 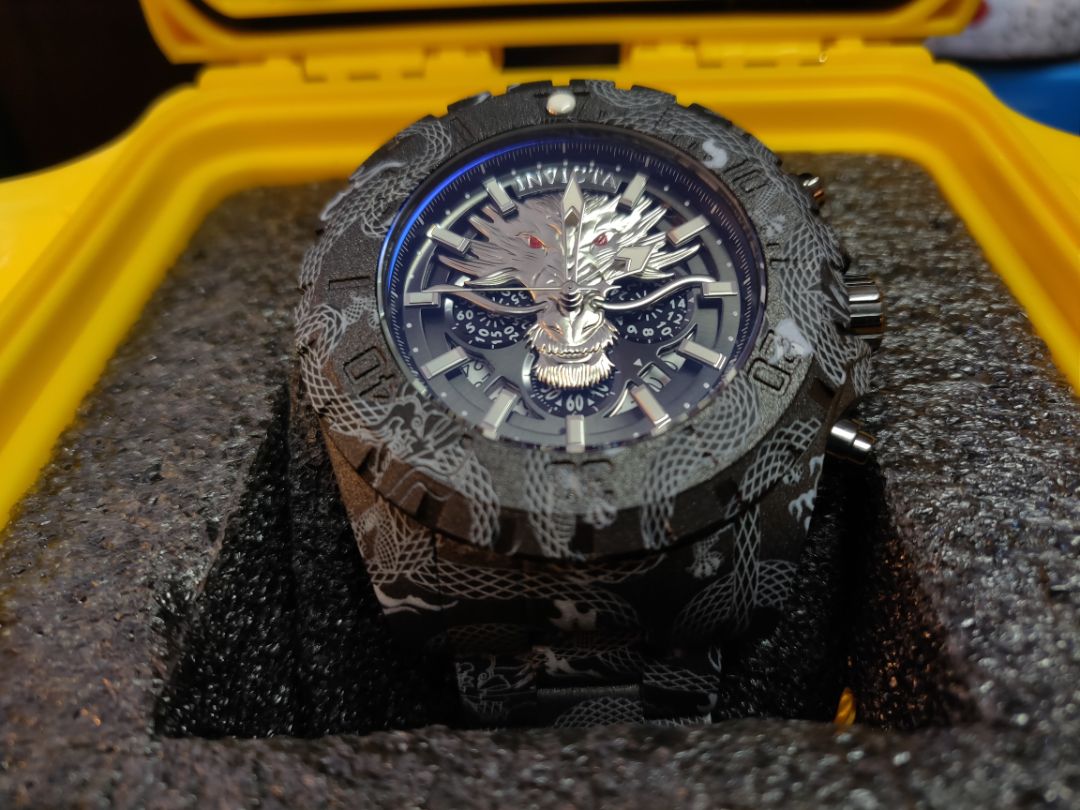 Well, maybe…somehow. One could hope….

I wish something could have saved that…

Anyway, here’s another dragon themed pick up, from a while back. I’ve had my eye on this hydro-magic-graphics idea from the land of Mr. Lalo since various models were first released, but had not seen any iterations that didn’t look, to me, a bit like a Picasso gone terribly wrong.

This one seemed…subtle, in terms of the plating, and, despite owning a lot of not so subtle watches (and yes, there’s nothing subtle about a dragon staring out of a watch face, I know), this version seemed to all flow together, the gun metal, the somewhat muted hydroplating design, the silver dragon, and the white indices. It's loud without yelling, I guess? To me, at least. 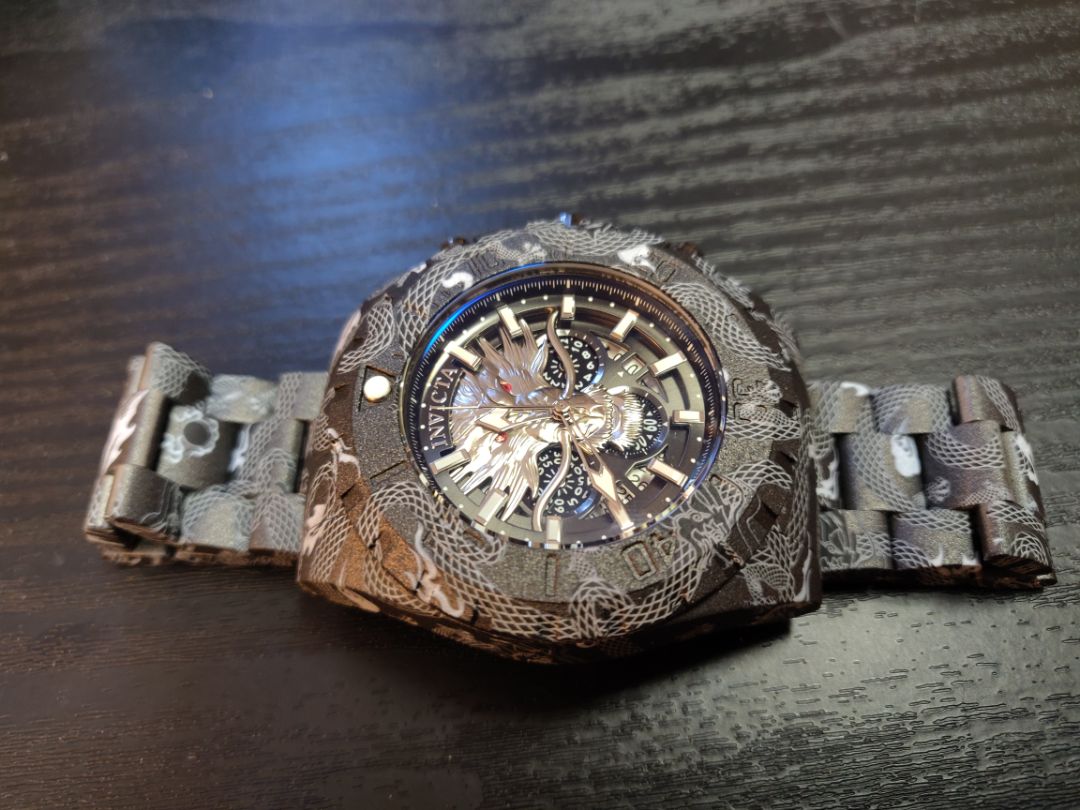 I was torn between this and the blue version, but I liked the gray, most. It seemed evocative of dragon scale, at least in color.

Let me say straight away that the hydroplate finish is very pleasing, not just in how it looks (FAR better in actuality, than photos convey) but in how it feels. Difficult to describe, but it is unique to not have bare metal against the skin, in an all stainless build. Almost a softness to it. Very comfy. 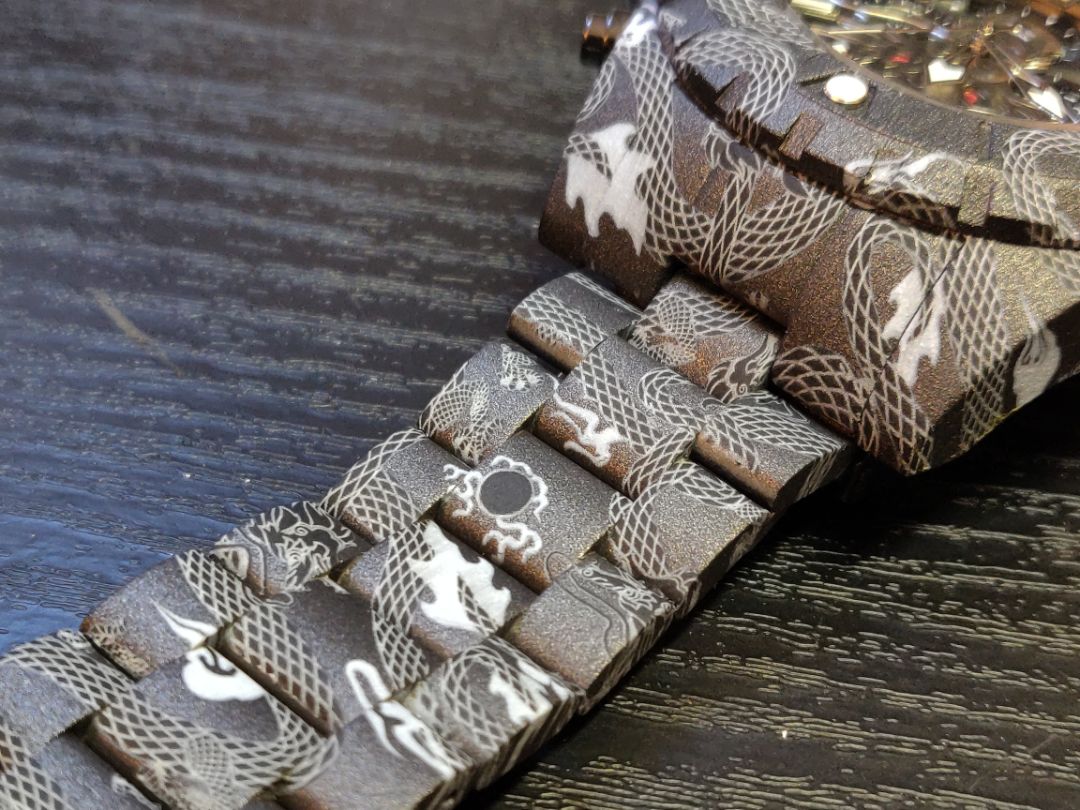 I’ll hope longevity is there, but, considering all the whacking around to adjust the bracelet, with zero damage and no scratches, it seems a sturdy finish.

The bracelet was crazy longgggggggggggg, and I had to yank out seven links. 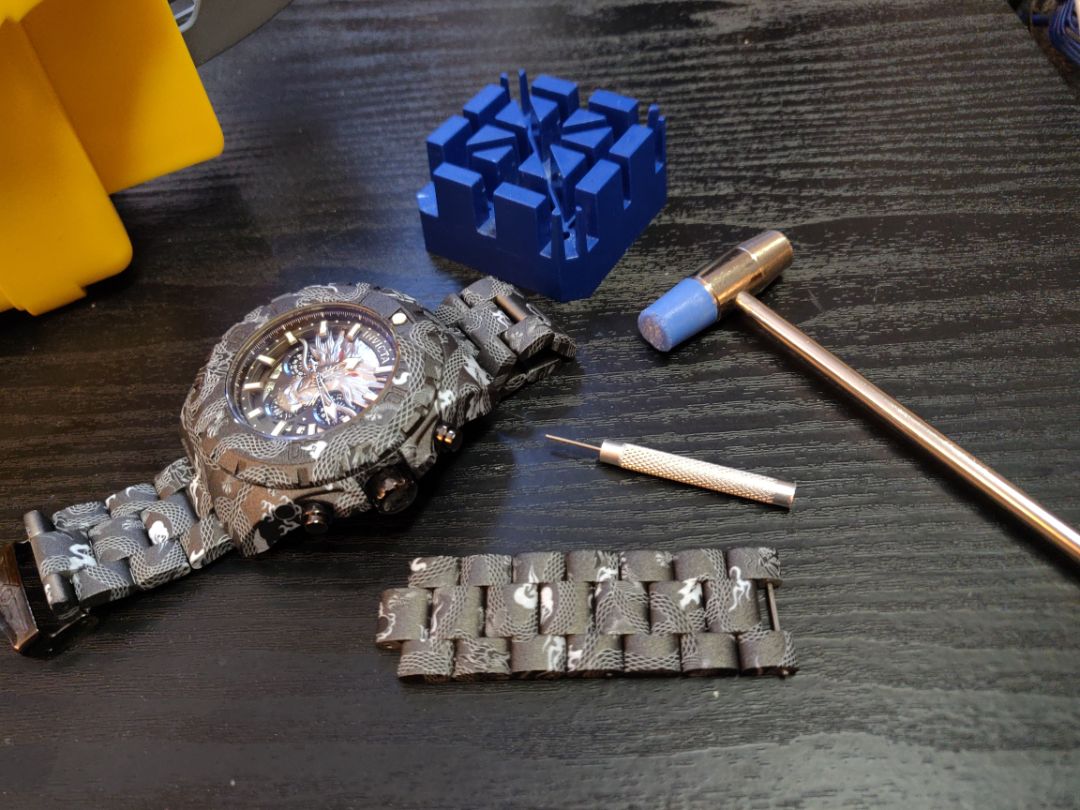 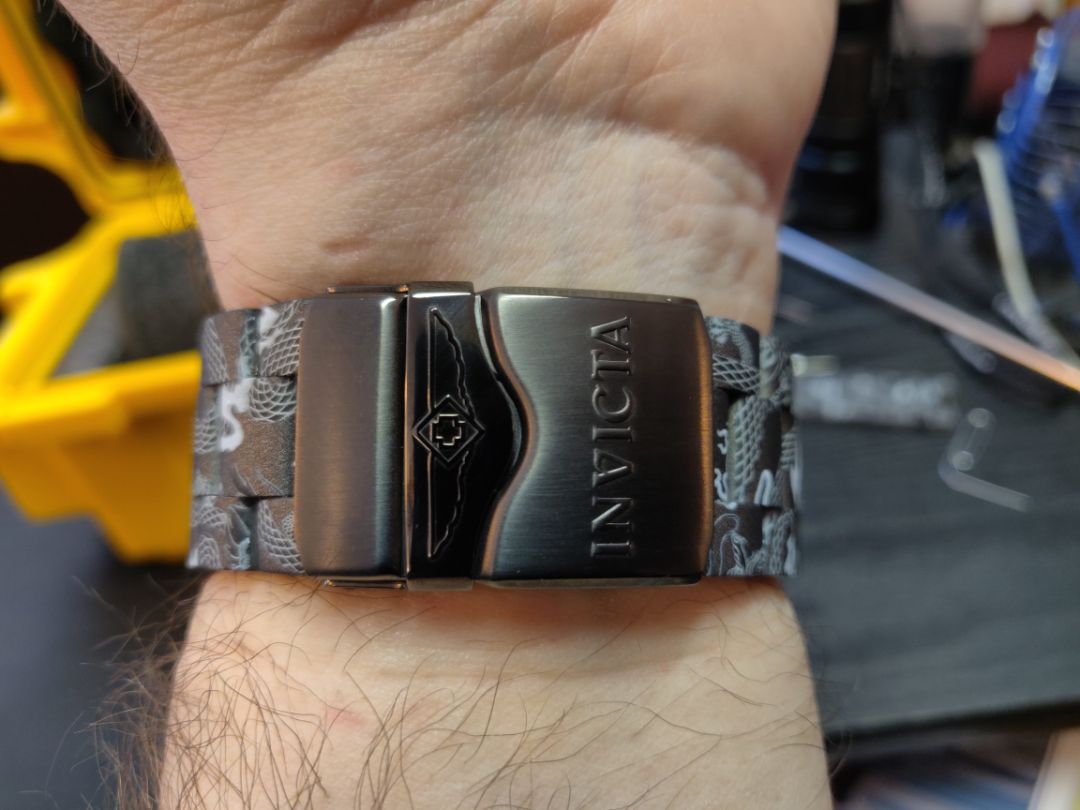 You can get a bit of an idea of the hydroplating, looking inside the solid links. Fortunately the applied pattern is random, so removing links did not screw up the graphics, although I’ve seen other models where it looks like it could impact the intended image. 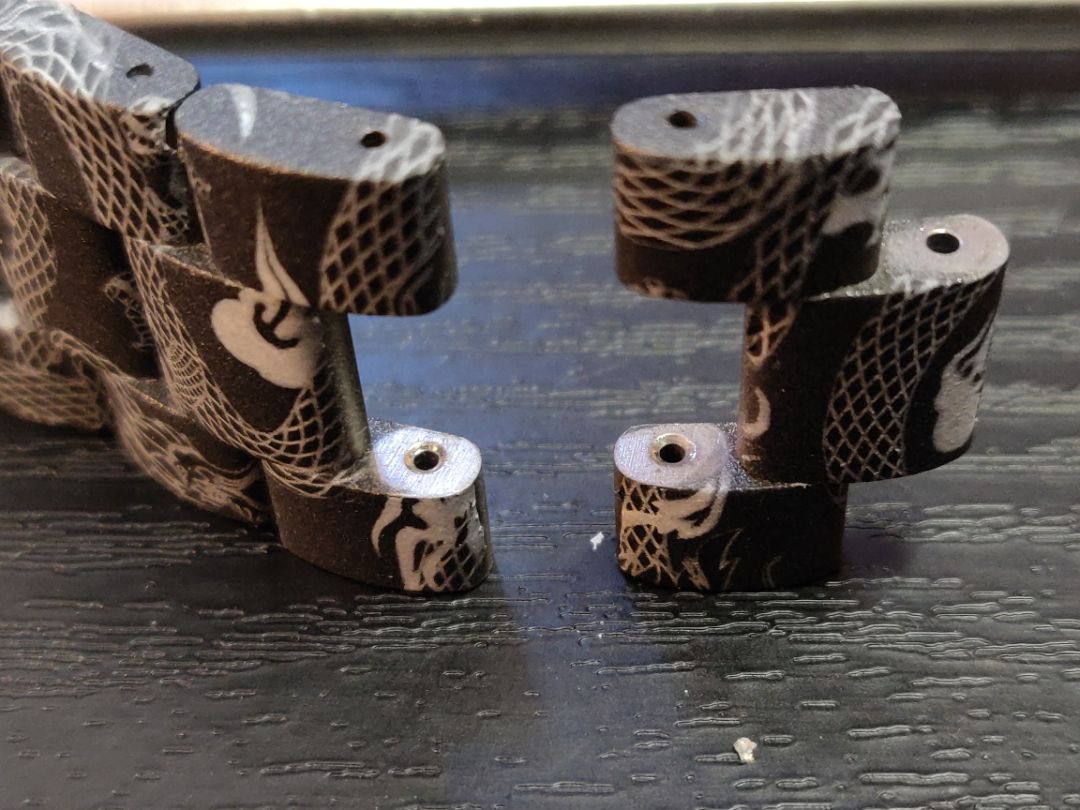 Solid end links as well, and a machined clasp. The finish on the clasp is not coated, but matches the color of the pushers and crown (just a push pull crown, as I mentioned). 100m WR, Flame Fusion crystal (no doubt fused together from fiery Dragon’s Breath!), and the movement is the Seiko VD53, which does give a split time chronograph and a 24 hour dial. A date window is tucked in there, as well. 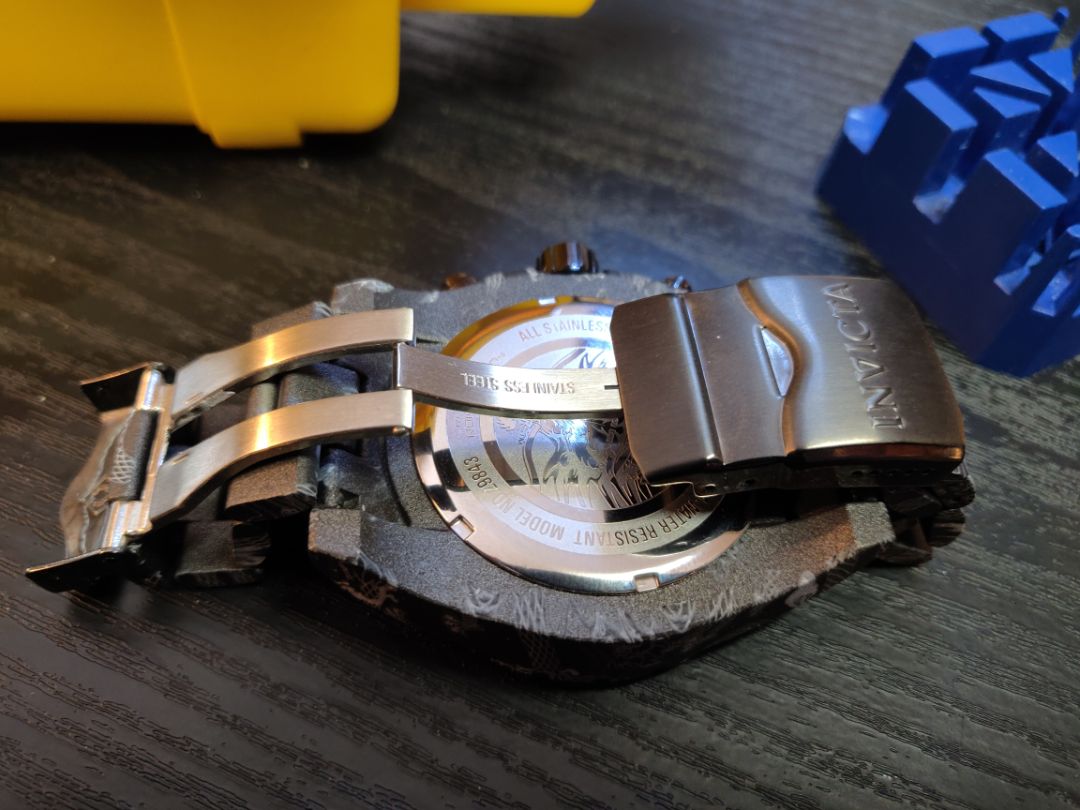 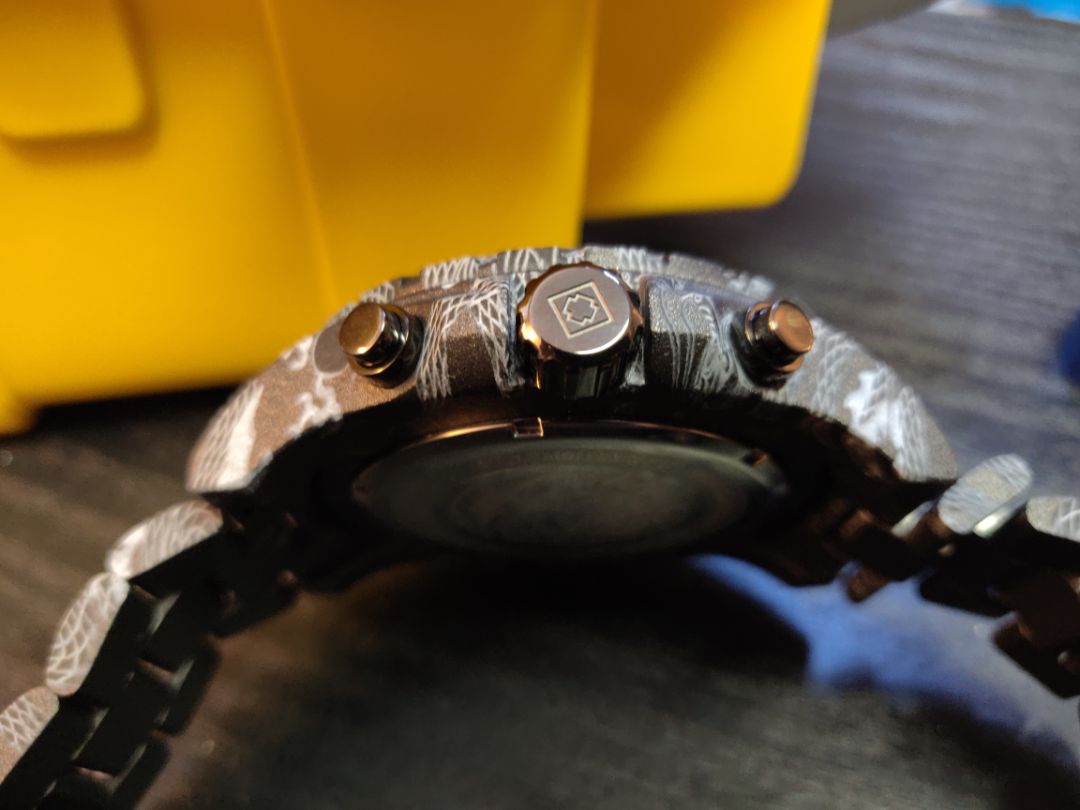 Again, typical of these theatrical pieces, the dials don’t prove to be very legible for practical or precise use. The chronograph minutes, for example, are only marked in five minute increments. 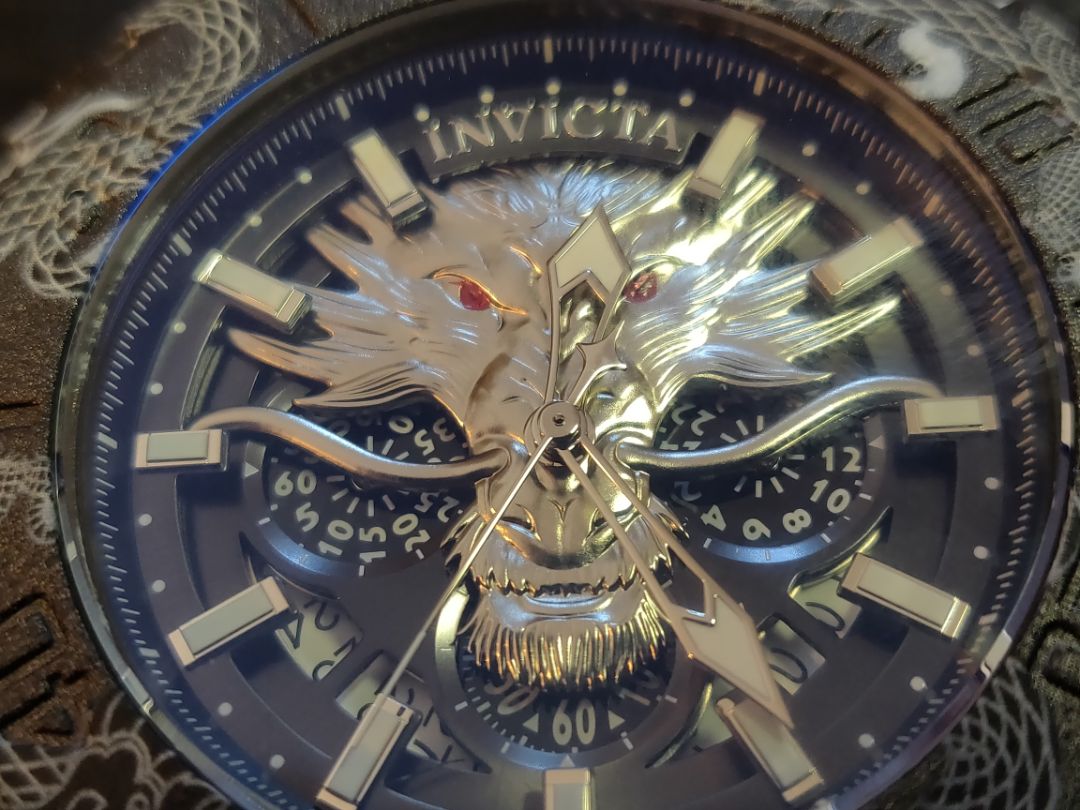 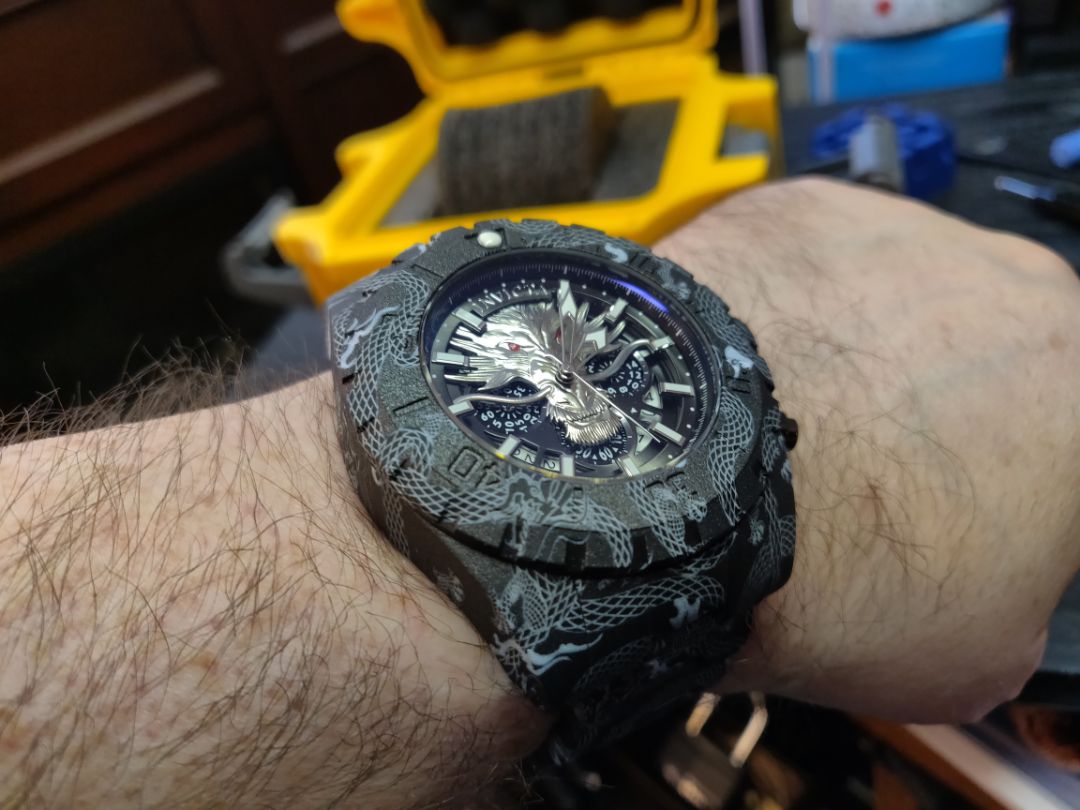 You do get a timing bezel, however, so elapsed time can be tracked that way.

Here’s the case side – gives a good sense of how this treatment presents itself. It’s a great look and Invicta once again proves itself at interesting design elements. 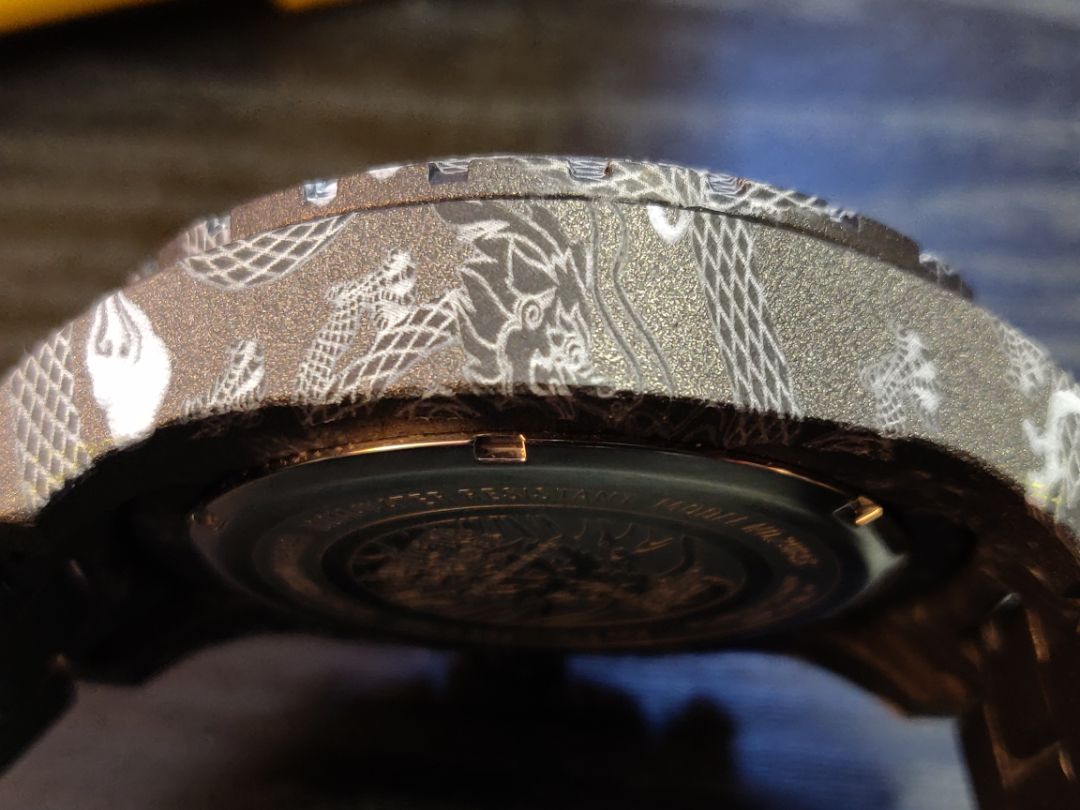 I wonder sometimes, as a side note, where the dragon character entered into things. I mean, I’m not sure of the correlation, although a historian of the brand could possibly enlighten me. A dragon is not particularly sea-going, so, even in the SAN series, I wonder at it a bit. Puff the Magic Dragon only lived BY the sea, not in it.

Even so, the dragon here does not disappoint, front and center glaring out of the dial with those red eyes, and the scruffy beard and mustache. It’s a great bit of dimensional art, to be sure.

The big whisker on each side of the snout…well, I had a laugh when the hosts, on ShopHQ, LOL, googled “dragon whiskers,” on air, while trying to determine the nature of what facial features a dragon is supposed to have. Suffice to say, the NSFW findings were not read aloud.

I think the visage is pleasingly fierce, and the watch itself is a nice complimentary piece to the other dragon watch I picked up, quite some time back. 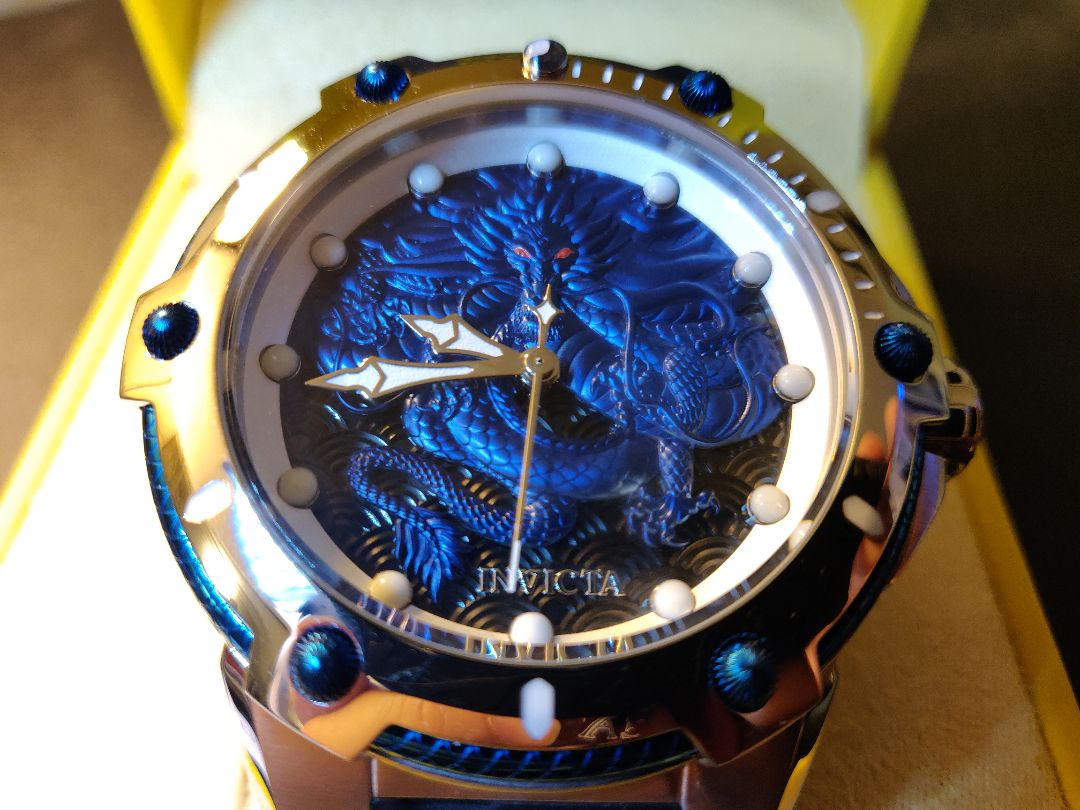 It’s a hefty beast in how it wears, but it parks up comfortably enough. 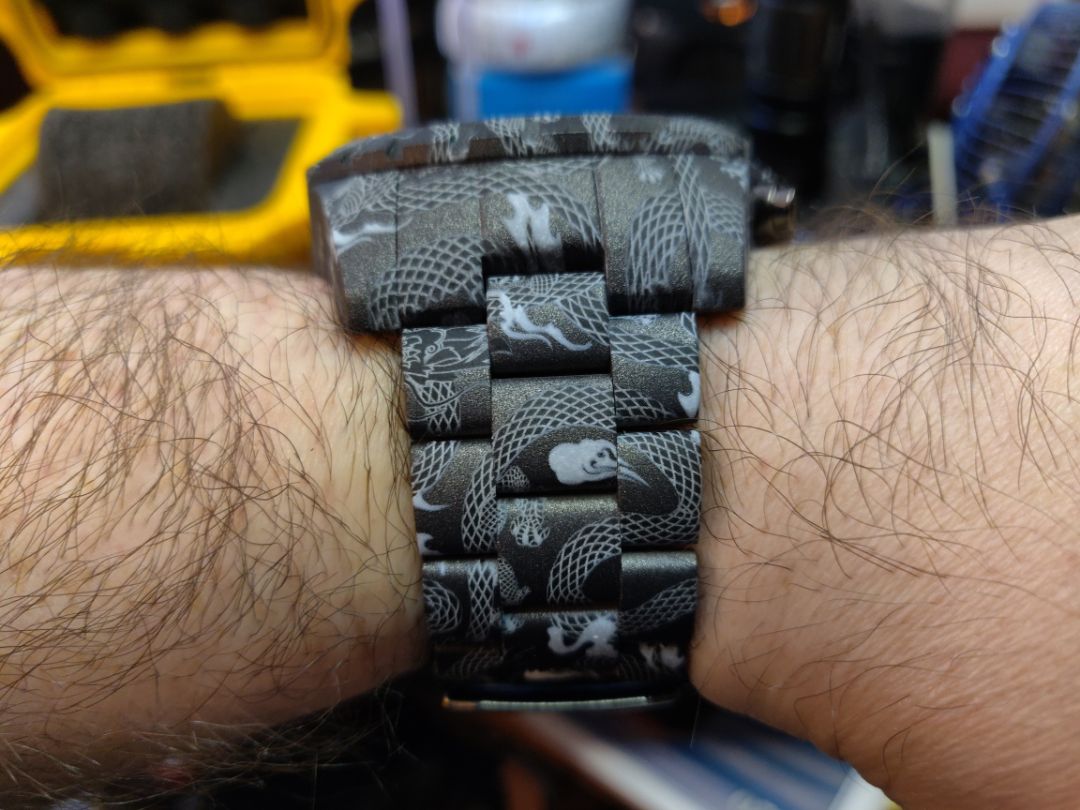 Now, a side note on quality, LOL. Here I was just some time ago blathering on about my Invicta luck, that I just don’t tend to get watches with faults, and, as I’m doing the pics here, a close up shot revealed something odd….a HAIR under the crystal! That’s right, stuck between two indices, what looked like someone’s eyelash, EGADS.

Interesting when I bought my Breitling, I was reading up on the factory conditions – like a “clean lab” for medical research almost – the air controlled for temperature, humidity, ultra-filtered and swapped out every six hours, wow.

For watches cased up in less than sterile factories, cleanliness and fastidiousness don’t factor into the build in some situations, it seems, and this was one of those cases, since the Dragon picked up a hair, gross! At least it wasn't a french fry, from someone's work station mid-day snack, haha.

Not a fatal flaw, thankfully, and I’m savvy enough now with my little tools to open it up, remove the crown and pull out the movement to very carefully remove the offending follicle with tweezers, so the surgery was a success. I mean, at this price, no surprise, but that was a first for me, finding some grime under the crystal.

Did you see it? My crummy eyes missed it, so, haha, three cheers for doing a review and taking some close up pics. 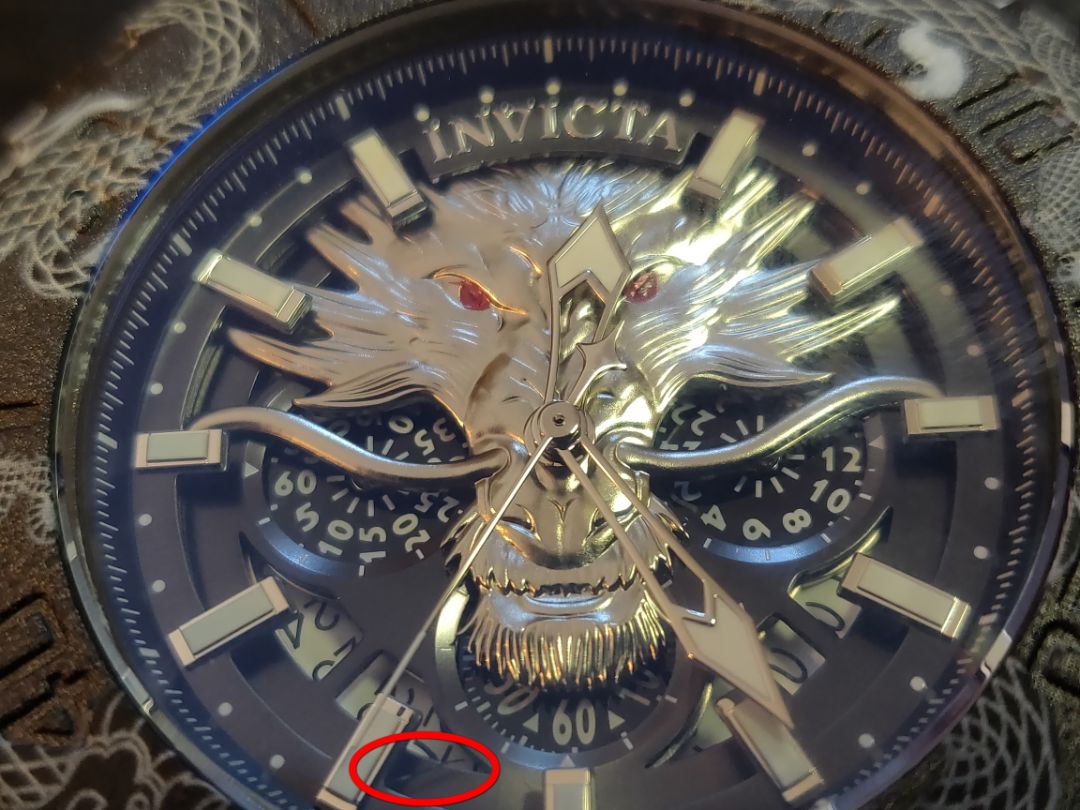 And, after the clean up, all gone, yayyy! 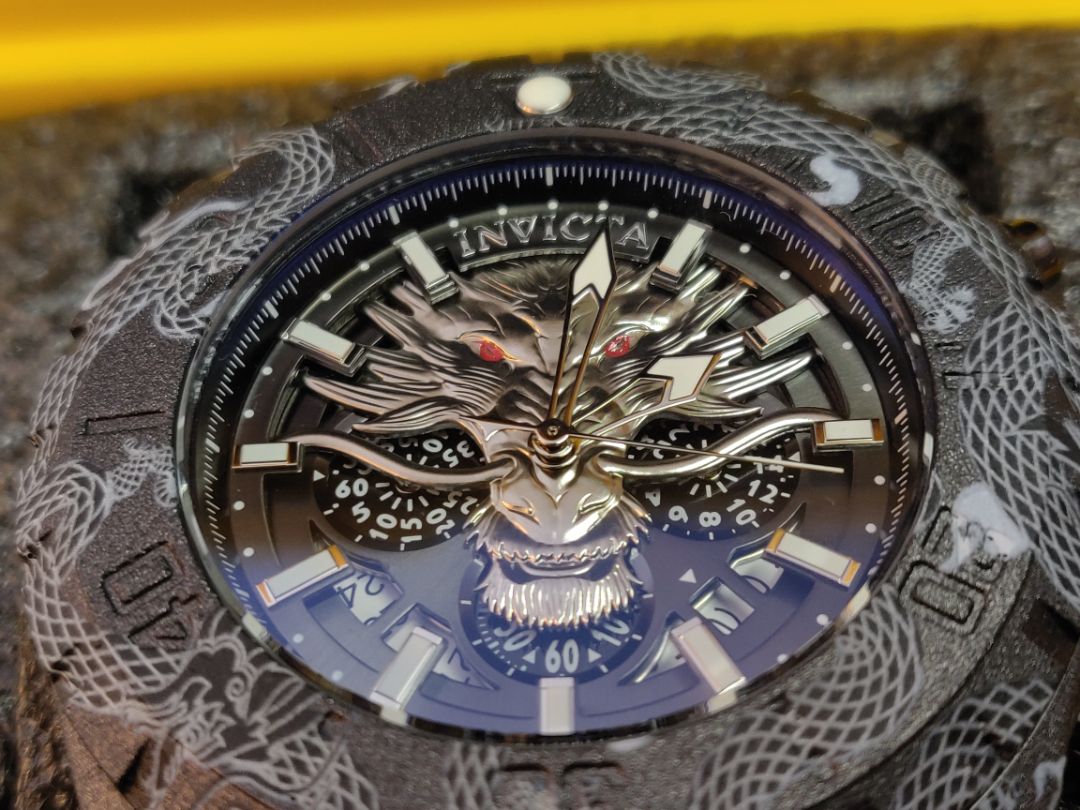 My summary of this is that it’s another novelty watch, just bought for fun, really (and to check out the plating concept) and it came at a super low, very pleasing sale price.

I really can’t take Invicta too seriously, and certainly not in offerings like this, but it’s a brand that both pleases me and often just amuses me. It’s a cool watch, no doubt, although perhaps being more at the basic end of the spectrum in quality, despite the extravagance of the hydroplating effect – which is very well done. Would have liked to see it in an auto, perhaps.

I love the coated surface though, both in how it looks and feels on this watch and I wouldn’t mind having a few more of this these hydroplated wonder-watches down the road.

I will forever wish that they cared about lume. Especially with themed and character designed watches, great lume could add a lot. I was charging it up with the UV light, for the dismal lume show, and snapped a pic of how awesome it would be with lume effects for the dragon’s eyes, and even for the subdials. 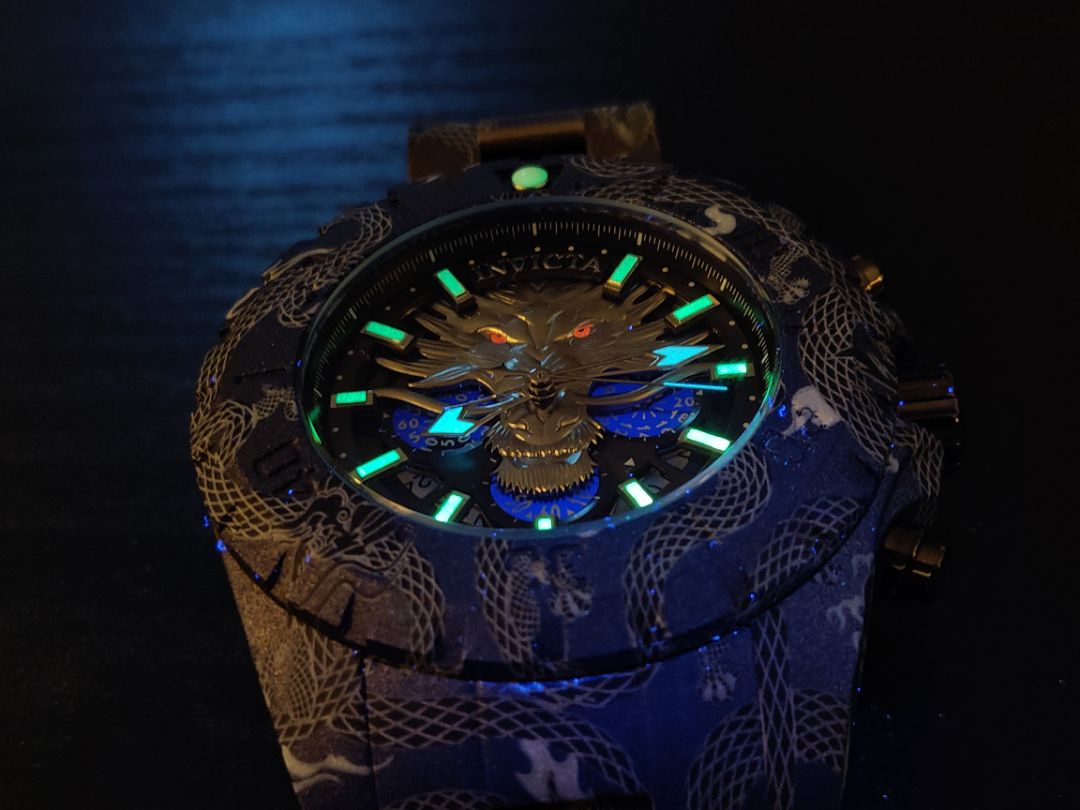 Alas, this is what they give you… 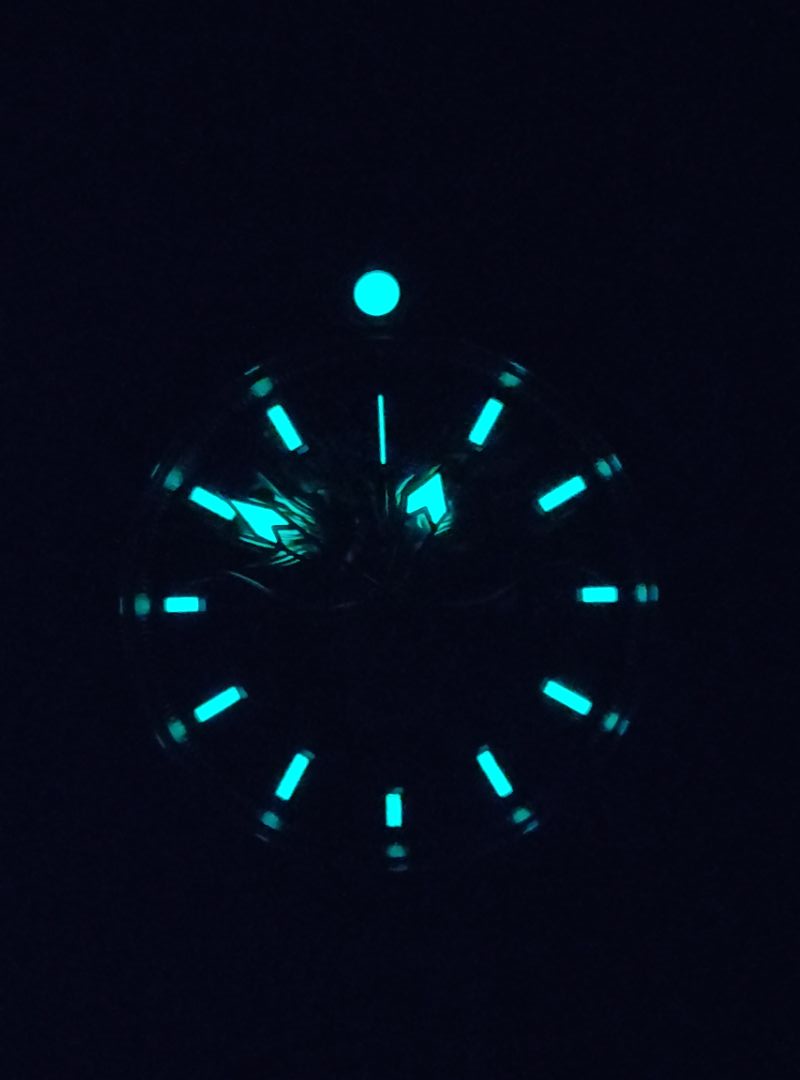 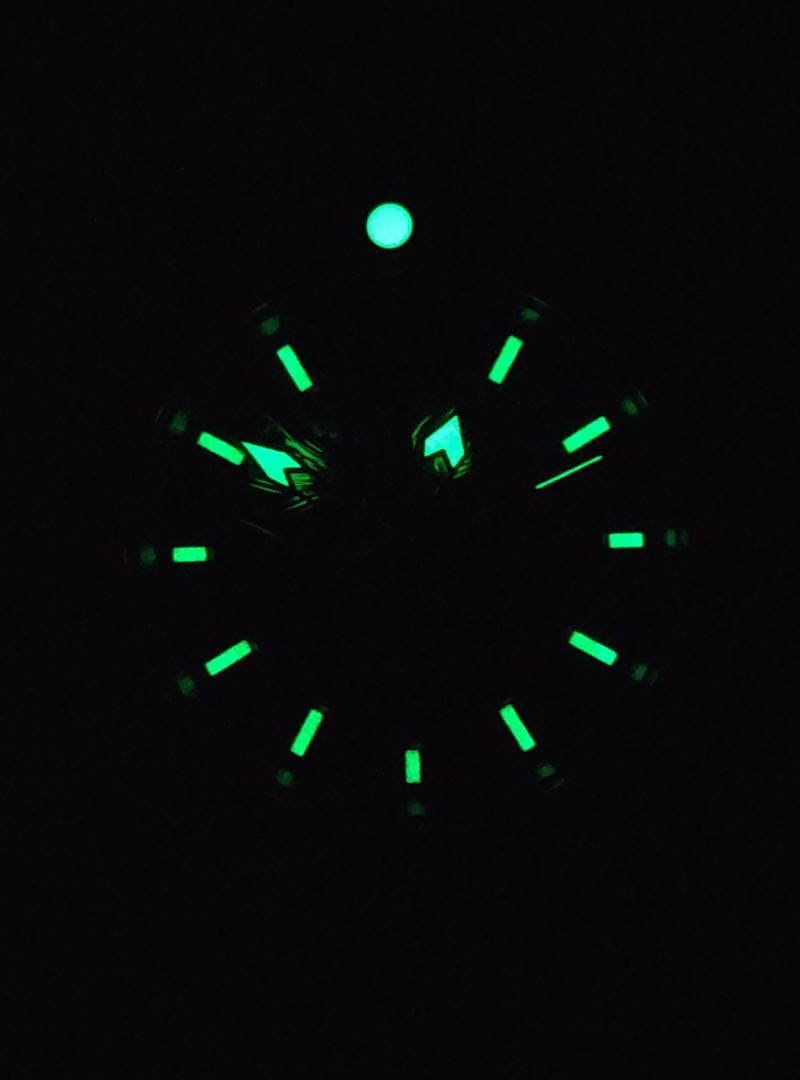 I tried to photograph the ongoing fade, but it faded out so quickly my camera couldn’t even pick it up, after about five or six minutes.

It’s a failure of the brand I accept, at bargain prices, but it does keep me looking elsewhere if the asking price is beyond my “Invicta Comfort Zone.” Unless it’s the rare case that the design is just too good to pass up, or is, to me, collectible somehow.

Anyway, I’m rambling, sorry. A fun watch, and the hydroplate is quite unique. I could have done without the extra eyelash though…. 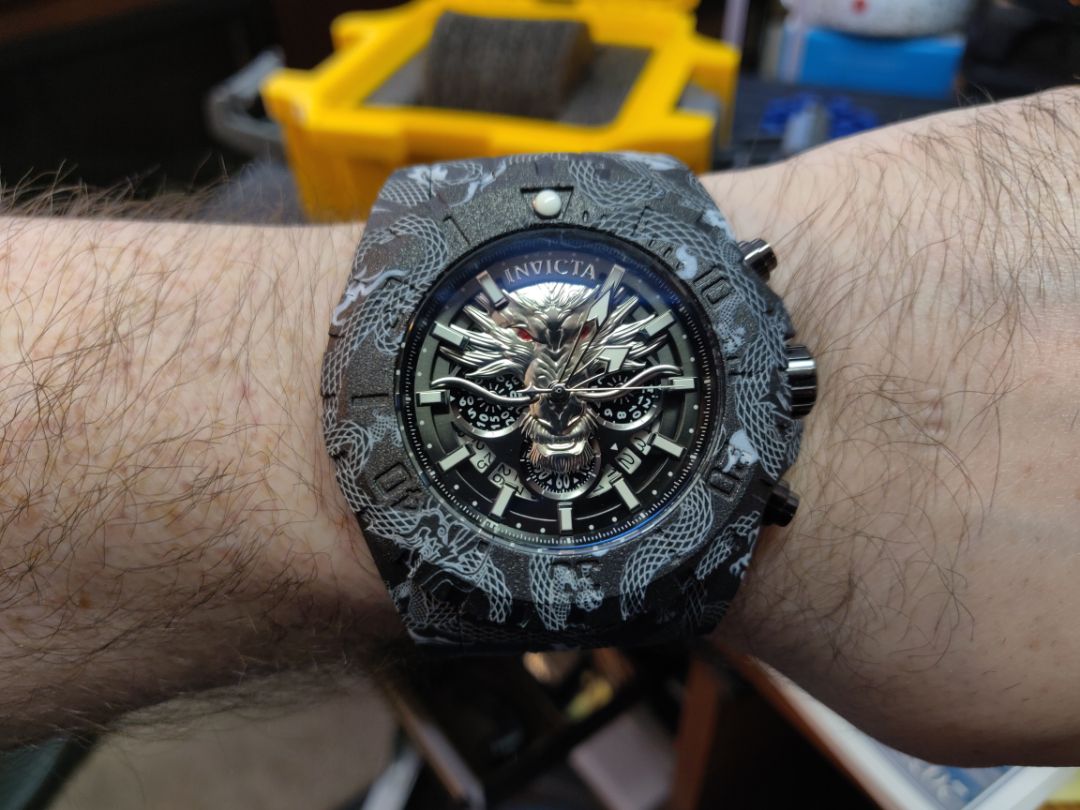 call me crazy I like the plating... ( texture well described ) enter the dragon muttonchops whiskers and mustache ...

waiter there's a hair in my soup...

- give some plasma 2many ; with your anti-bodies they can cure the tool virus

Looks like a fun piece. Let us know how the plating holds up over time

Looking good , congrats and thanks for the pix.

Congrats on picking up a pretty cool watch.

Congrats and looking good, in spite of da fade and leaky vessel issues.

Very interesting piece. Congrats, and thanks for the review & pics!

ScottyB said:
call me crazy I like the plating... ( texture well described ) enter the dragon muttonchops whiskers and mustache ...

waiter there's a hair in my soup...

- give some plasma 2many ; with your anti-bodies they can cure the tool virus
Click to expand...

Yuppers the plating was a wonderful surprise in how well it was done. Ahahahaha, hair in the soup, indeed!

sota0003 said:
Looks like a fun piece. Let us know how the plating holds up over time
Click to expand...

Yup I'm definitely curious on that as well!

2manywatches said:
Yuppers the plating was a wonderful surprise in how well it was done. Ahahahaha, hair in the soup, indeed!

yeah..in case i was 2 obtuse... that hair under the lense made me think of that...i guess famous line from grade B Hollywood comedy
Last edited: Tuesday at 9:55 PM
S

Let me say straight away that the hydroplate finish is very pleasing, not just in how it looks (FAR better in actuality, than photos convey) but in how it feels. Difficult to describe, but it is unique to not have bare metal against the skin, in an all stainless build. Almost a softness to it. Very comfy.
Click to expand...

Very cool looking skin on this snake watch, congrats. I think the process is similar to the ones in the videos below. Which could explain the silky feel against the skin.

The clear acrylic we recommend is as durable as the paint used on auto exteriors. It is extremely resistant to scratches and debris." 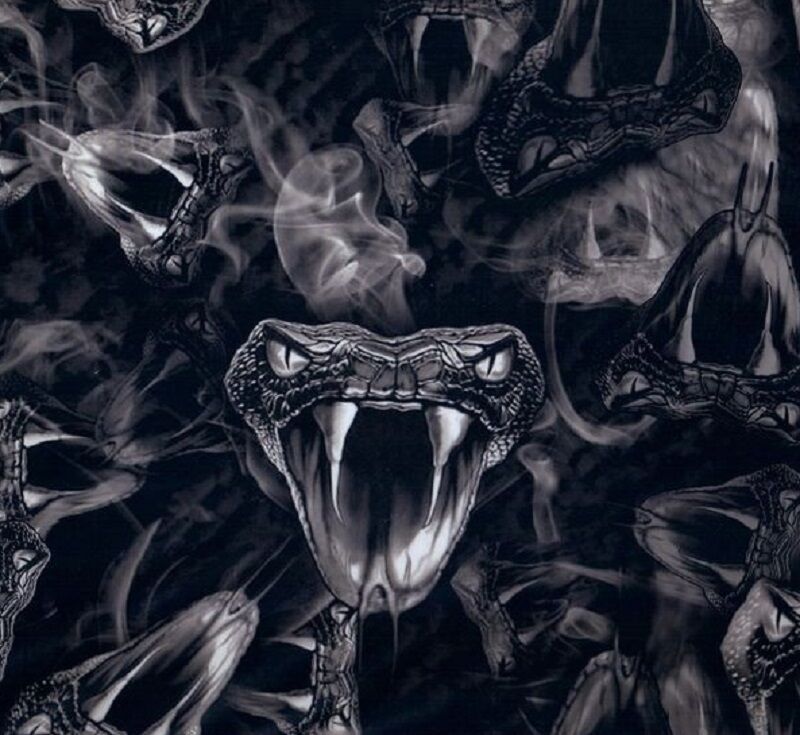 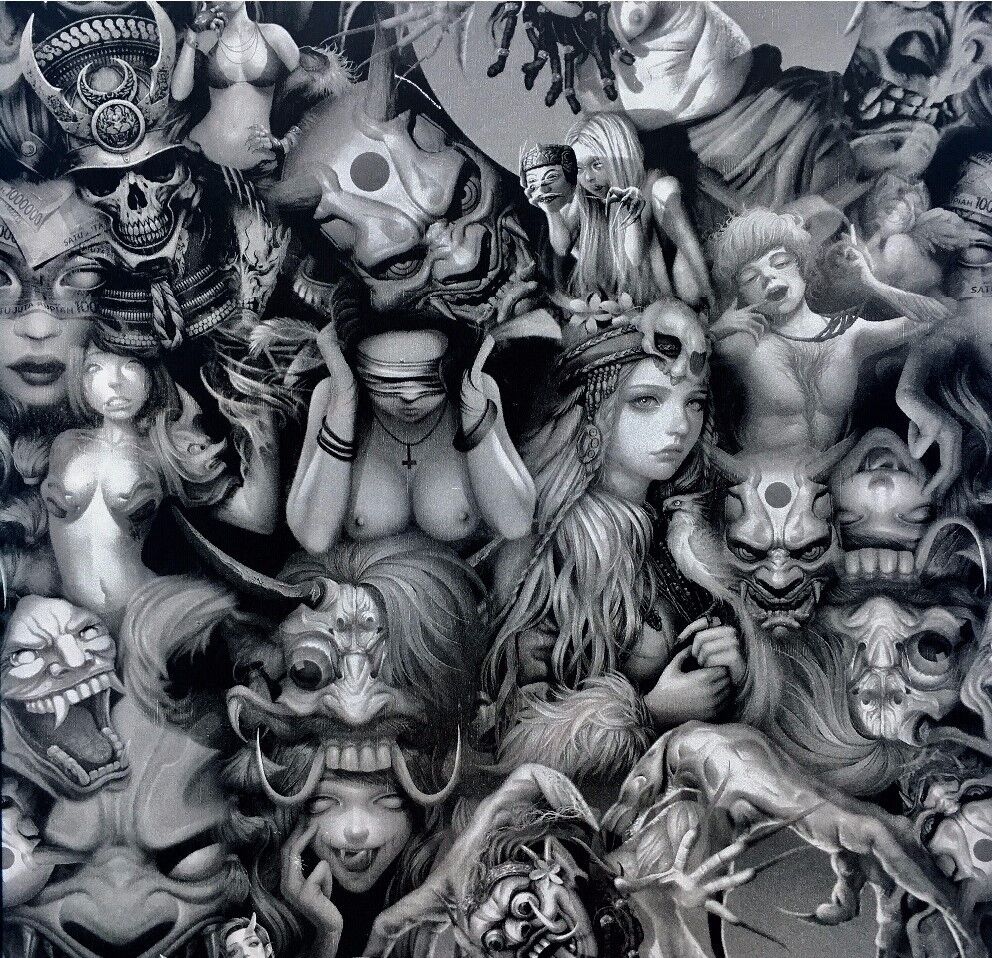 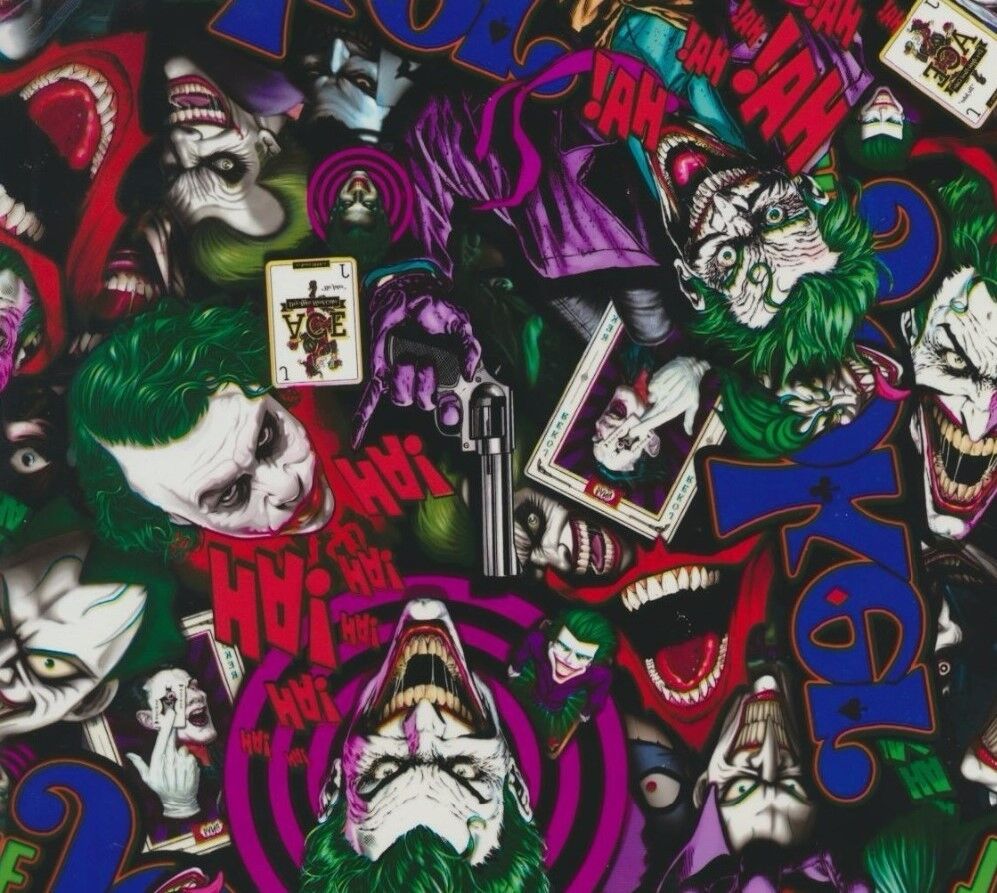 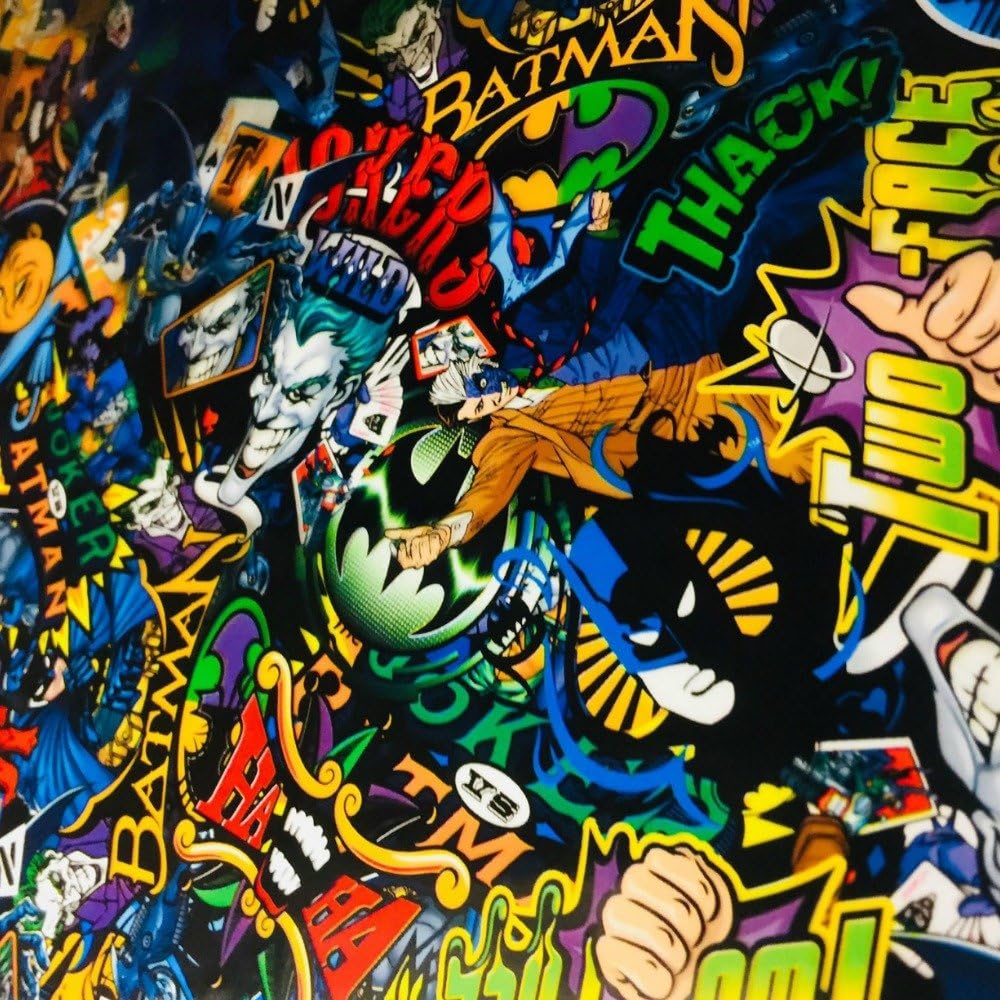 ScottyB said:
yeah..in case i was 2 obtuse... that hair under the lense made methane of that...i guess famous line from grade B Hollywood comedy
Click to expand...

Yes, a famous line, although my familiarity is from Sesame Street, as a youngster, some bit about a fly in the soup. Interesting that, as I shall share in upcoming posts, this has since struck several times, and it's a new development in my Invicta experience, haha, or maybe it's because I didn't do macro photography of all my previous purchases. Or, watches are now being assembled in open pits, with the parts hurled at the cases, I don't know....

At least I'm getting adept at cracking open my watches.

1 of the nice nooks of the hobby...learning a little about metallurgy...ionic plating, damascus steel colored gemstones & space rocks...

roadwarrior said:
Very cool looking skin on this snake watch, congrats. I think the process is similar to the ones in the videos below. Which could explain the silky feel against the skin.
Click to expand...